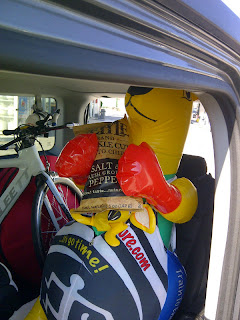 The only thing left to do was pack up the car with my gear, my sister, and the TTE Kangaroo! I finally realized that I was going to make it to the start line but not, unfortunately, without other set backs. My "wing man" Mike had actually been diagnosed with a stress fracture in his foot and now it was just me on the start line. Though I didn't realize it at the time, Mike not starting actually sucked some "mojo" out of me. Because we had trained our toughest sessions together, it quite honestly didn't feel right that he wasn't going to be out there. On top of that I had developed a foot "problem" (while cycling) in a small, but powerful muscle, on the bottom of my foot. (flexor digiti mini brevis) It had bothered me in the last 3 weeks BUT I wasn't really worried about it since I had been treating it, and figured race day would take care of the pain ;-) 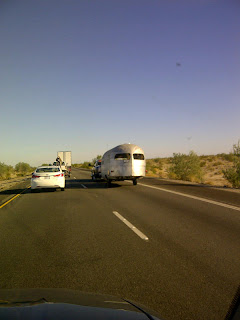 So hit the road we did! Amazingly it was an uneventful drive and door to door (including stops) was 12:15 without any warp speed driving. My two favorite sights on the way were of: 1) A couple "Airstream Campers" that being transported somewhere for "rehab" (The one above looks more like the ultimate aero helmet) 2) A guy, on I5, tethered to and pulling a shopping cart with his luggage in it! Wish we had the camera out for that one! 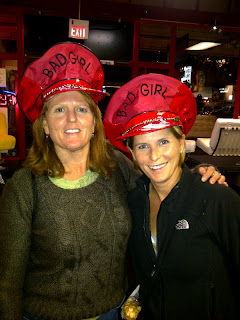 Arrival in Tempe was made complete when my wife (the other half of the bad girls above) dropped in to town on Friday. Having my family, and then friend/athlete Kyle, around really made the time more enjoyable. We were a small but powerful group! Because of them I was pretty calm and optimistic! 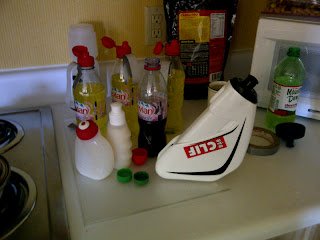 Calm until the day before the race - DOH. Honesty the nerves and anxiousness made me feel alive, challenged, and assured that there was no taking anything for certain! The 24 hours before the race seems pretty routine ... eat, a little training, eat, pack up race gear, eat, work on my race day science project (above), eat and HOPEFULLY sleep! 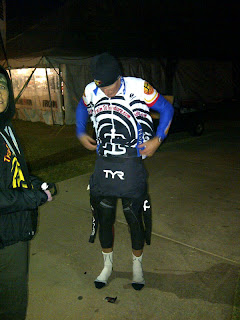 Race morning is always a gut wrenching experience for me and eating is difficult. I stick to liquid "foods", take comfort in the family/friends around me and try to stay warm. As nervous and anxious as I was i felt a bit more at ease because getting to the start line had been so much of a challenge. With that overcome I simply had no idea how this one was gonna play out! 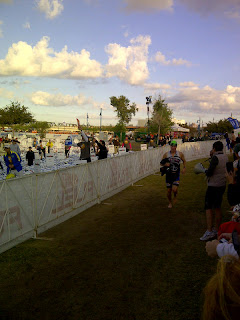 The swim was an absolute chaotic, slow-swim mess like I have never seen before in 20 years around and in the sport. (it was my slowest wetsuit Ironman swim since my first in 1994) I'm not sure what it was BUT I was quite certain, (and I stated this to the crew as I ran by post swim) that whomever set the swim course in the morning was quite possible going at it hard with the Captain Morgans!
I moved on to the bike quite frankly it seemed to go by pretty quick. Because I wasn't sure how the foot would hold up and I KNEW that my back end run fitness was poor I kept things really smart on the bike and finished the last 18 miles feeling VERY good ... 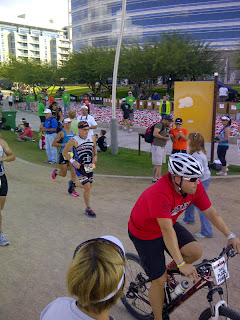 3 Loop Run Time ... the multiple loop course is easy to break down into mini goals with pacing strategies, opportunities to see your "peeps" often BUT you end up with a lot of sharp turns and corners ... OUCH. The first 12 miles went by pretty quick (even though I was running super conservative / mellow) but the foot was starting to become more of an issue than I planned. After having a little pity party for myself at one point, I realized that by power walking for 60-90sec, every 3-4 minutes I could "re-set" the foot and still manage some running. I kept that rolling the best I could but got off my nutrition schedule and then realized I was hungry ... HUNGRY? I never get hungry in a race ... OOPS. I kept it moving and got er' done somewhere around 10:27 on the race clock 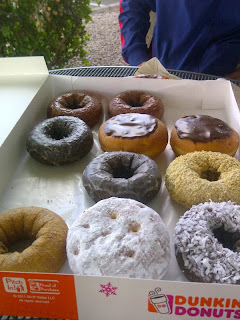 When things don't go as planned go to Dunkin Donuts the next day! Across from me was John Dahlz, the guy that led the pro race out of the water. John had a tough day too, tougher than me, as he had lost all his race nutrition from his bike early in the ride and things went south from there. John came in a bit after me and obviously his race day didn't go as planned either ... classy move by finishing by a great athlete that could have easily packed it in! 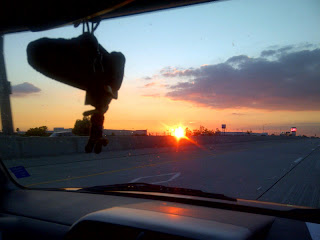 When things don't go as planned, take a long drive home 24 hours later and hope the sun comes up! (it did) Reality is, that drive allowed my to do alot of thinking, planning, eating, dreaming, and wondering. Though it was long, it might have been the best thing for my brain. (Definitely not my body though) ... Many thanks to my sister for driving 90% of the route home. The freaking Kangaroo was deflated and bloody worthless by then! 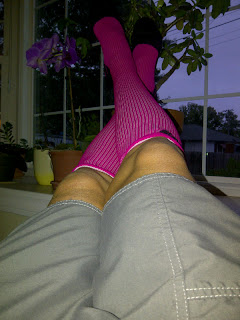 It took some time, days in fact, to tune the big picture in. As I looked at all the details I realized a few things:
* It took 8 weeks from when I was sick to get back to where I was 10 days before the Big Kahuna Race ... not optimal long distance racing fitness!
* I pulled off what I could on about 4.5 weeks of solid training and 10 days of freshening
* I've got a big support group that was pulling for me. Without them, and their energy, it may have been over sooner!
Thanks to EVERYONE for their support on Twitter and Facebook (too many too mention) but especially TTE NATION and the ENTIRE crew from Endurance Corner (especially Gordo and the Tucson peeps).
When things don't go as planned take a step back, and if at all possible do one of the things my dad taught me in his living days ... improvise, adapt, overcome!
Have a GREAT Holiday Season ... DL
NOTE: I may post a traditional race plan that I wrote a couple weeks ago ... I'll go back and read to see if it's worth the "boring-ness"
Posted by Dave Latourette at 11:23 AM

You did awesome coming into it less than 100% Way to go Dave!