I call my trip and race at Ironman Louisville an experiment because I was in unchartered territory mentally and physically. Mentally because I had never turned around and attempted a long distance race so soon after a previous (this gap was 9 weeks) and physically because it was likely I would lose some fitness based on professional commitments at key times leading into the event. Even with that, I really wanted to make the trip across with one of my athletes and couple other locals that were racing.

Pre Race: I knew I still had some good fitness based on power & pace in specific workouts but no doubt I wasn’t able to do some key sessions 6 weeks out and 4 weeks. As well as missing some of the training in those periods, which really wasn’t the biggest issue, it was my professional commitments creating fatigue that was more detrimental. Coming out of those 3-4 day periods I needed to get energy back and slowly build back into training. I ended up with a good solid 17 day block leading into a 10 day freshening period that culminated with the race. As I planned the race I thought if I played it VERY smart and let other people fall apart in the rolling hills of the bike and then the heat of the run I could get that top ten I thought possible weeks previous. 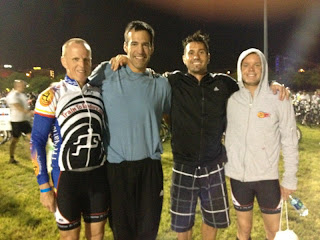 My Version Of The Race

SWIM … this was a no wetsuit (85 degree water), time trial swim start where some people start lining up as early as 5am considering there is no starting order you are given. My only concern initially was starting early enough that I didn’t get hung up in a mass of cyclists in a section of out and back that has a fast descent in it. I ended up starting about 23 minutes after the first swimmer went off. Un-forseen Mistake #1

As soon as I jumped in the water the stroke felt very good and I was cruising nicely and wanted to swim strong until we got out into the river and were able to jump on the current and roll downstream. Come to find out there was no current in the river this year (lack of rain) and swim times were slower across the board. The plan was to get to the downstream section by swimming a strong the first 1000 meters, then relax on the downstream section to conserve for the rest of the day and try not to overheat in the swim. In the end I had a solid swim but was out there longer than expected.

Things I might change (or advise) considering I swim relatively well compared to the field:
-Start earlier … that swim was so congested it was like playing Frogger (the video game) in the water (what a mess)
-Not sure if it’s legal but I would have taken my swim cap off and stuffed it in my suit … I think the 85 degree water started the warming process much early (plus I expected an easier ride to T1 with the current)

BIKE
I had a pretty simple plan considering a hot humid day was expected … ride very light on power across the first hour and then ride about 5-7% lighter than my effort from 9 weeks previous and execute a slightly adapted nutrition plan from 9 weeks previous. On top of that I had to be really secure in letting everyone else destroy themselves in the first 70 miles of the bike knowing the weather forecast for the run

The execution started out perfect as I was moving quickly with a light tailwind, sling-shotting early starters, and with very low wattage. Overall it was pretty uneventful but I had little bad patch starting mile 45’ish (that lasted about 10 miles) as the course drops into some low lying areas that seemed hotter than elsewhere (a good little yellow flag for me to watch pacing) After that I was feeling very good and really just need to keep holding back, keeping even pressure on the pedals and staying fueled. Late in the bike (mile 90;ish) I actually had real low point where I thought maybe the race was in jeopardy (bad stomach and it felt a little warmer) so I switched to on course sports drink and tried to stay focused into the solid headwind the last 25 miles home. Fortunately I was feeling a little better just past mile 100 and even noticed more athletes sitting in the shade likely out of the race. Heck, I even had to back off power a little as the wattage numbers were creeping up. The other thing that was encouraging was after a long period of riding by myself I must have passed 15-20 riders in the last 10 miles of the ride

Things I’d change (or advise) based on the days conditions and how I rode:
-Maybe even ride another 1-2% easier … not sure where … maybe on the first of the loop sections?
-Considering my wattage and kilojoules expended (AND heat stress) I would have gone lighter on calories and added a little more water and electrolytes 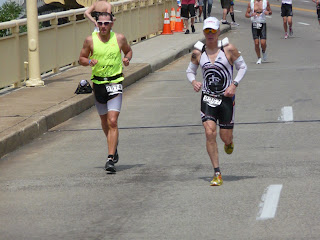 RUN … the plan was to open running 8:30’s and do everything possible to stay cool the first 3 miles and then just settle in to what was possible. I had done this in training (even up to 6 miles) so I knew I could auto pilot the first part of the plan.

I stuck very solid to that plan up through mile 3 and decided to wait even longer to see if I could move quicker later. As we got away from town it seemed to get hotter and or more humid as we hit residential sections with vegetation, plus my stomach wasn’t super happy. Even though I was taking advantage of the cooling tricks all the signs were pointing to me getting very hot. So I tried to back off even more, stay cool and try to get some fluids to stay down. By mile 13 I told my sister it was crisis management but she felt she needed to tell me I had moved up to 12th and everyone else was fading even worse than me. GREAT … now I had to decide how much the top 10 or maybe better meant to me … what I found out is 10th was enough motivation to just keep moving, and on this day moving was actually getting it done. While moving I was actually at a decent pace but I had to take really long walk breaks to get ice and cold sponges and drinks to try and cool down. There were times between miles 15-23 that I thought the day was done … until I get the word with 3 to go that I’m 10th or 11th. Honestly the last three miles were like running in the black hole as I was so overheated and under fueled by this point. I really wish I could have enjoyed the finish chute or the finish line but it’s all a blur. My buddy Mike reminded me post race that when we talked about finish placing I said; “for me to go top 10 I might have to get dragged off in a wheel chair” … ironic as it was, a wheelchair ride and two liters of IV later I found I got my10th

As per my previous blog entry I talked about my three year plan. I’m still 6 months+ away from that and as my wife said, I was 11 minutes away from pulling off the Christmas Day miracle on the day (a kona spot).  That was not even a focus of the day but it’s fun to be back in the game to the point where you can sniff it. When you come up a little short of the big goal it’s an indication the goal was/is respectfully challenging, BUT achievable … plus as a consolation it was nice to hit that top 10 again. In the end it’s not about the Kona spot but because we don’t have control over who shows up BUT it is about the day when I get back to a flow, get the execution right AND take advantage of all the pieces of the puzzle and wisdom gained over time.

In the end I don’t know that I’d roll that kind f experiment again with the time commitments between races but I sure had some learning that I can use for my athletes and myself:

-Hot weather races are tricky … racing in 85 degree water, 90+ degree heat and humidity is not even close to racing in a cool weather, cold water, wetsuit swim. My Kona athletes will get this reminder as they finish their preps. Though I had a lot of the pieces of the puzzle in place … 10 years removed from racing in the REAL heat reminded of a couple lessons. 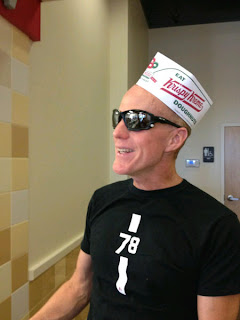 Posted by Dave Latourette at 12:30 PM